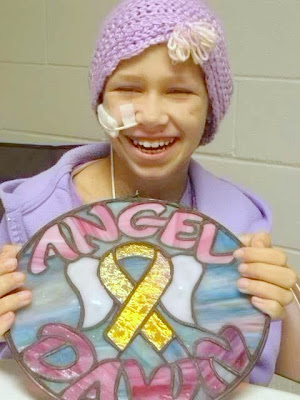 Smilin' like a goat in a brier patch this little lady celebrated her twelfth birthday on January 11th. She said her ice cream and cookie cake was the best part of her special day. This past year has been tougher than the back-end of a shootin' gallery for Angel. Yep folks, that in her real name. Last August a tumor at the base of her brain-stem was removed and diagnosed as malignant Medullobastoma. The surgery removing the tumor compromised her right side motor skills makin' it difficult to perform tasks that most of us take for granted. This 110 pound doll was hit hard with radiation and got so skinny ya couldn't see her shadow on a sunshiny day. Bless her heart, her weight plummeted into the mid~sixties as she lost her own beautiful hair and her skin was burned by the treatments. A test revealed another mass where the first tumor was removed. Angel underwent a second surgery which uncovered only scar tissue this time. To get the nutritional requirements needed to fight this battle, doctors put in a feeding tube. She has been undergoin' chemo treatments weekly and will continue to do so 'till mid~September. 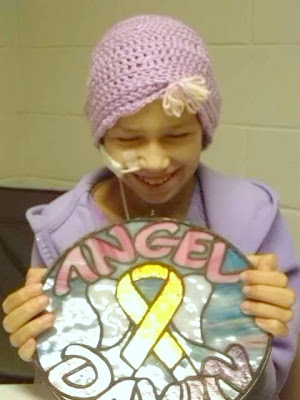 Angel said the worse day of her life was when the doctor sat by her bedside talking frankly with her in detail about her illness and the course of action to treat it. The best part of her journey has been the many friends she has made at the hospital. She just beamed as she spoke of her special friends Kate and Emma who are in a commercial promotin' St. Judes Hospital. Her Christmas was so very special this year filled with love gifts from Physical Therapy, Church, Hospitals and many, many strangers just like you. Angel's Christmas last year was not celebrated with festive presents but only by the love of her family. I have four legal pad pages filled with the love gifts sent by you, my wonderful blogsisters. You guys are the best! This Ozark Farm Chick is still overwhelmed with all the love, emails and prayers ya'll have heaped upon Angel. I do believe ya'll are sportin' your own wings!

Although Angel misses runnin' and playing with her dogs she is beginnin' to write with her right hand again. She is attending school as her condition allows for sometimes chemo shoots her immune system through the basement. Poor gal discovered that two of her best buds moved away during the absence of her illness. She is tried of people tryin' to do everything for her and just wants to be 'normal'. Angel is now weighin' in around 80 pounds and when she hits the 90 pound mark that feedin' tube comes out baby!!! Through it all she has retained her odd but wonderful sense of humor. A nurse asked as she was leavin' the room, " dear, is there anything I can do for you?" Angel piped up, "yeah, you can clean my window." Just as the nurse was about to find someone in housekeepin' Angel finished her statement, "on the outside." She was on the seventh floor!!! She's twisted like that...heeehehehe!!!

Angel told me that havin' cancer has made her more aware of God and has drawn her closer to Him. She once told me in Kid's Church shortly after her diagnosis that if God wanted to take her it was OK, she was ready to go as long as He brought her brother back home safely from that 'Big Sandbox' in Afghanistan. Doesn't that just melt your heart? The girl does live up to her name 'cause she's just a precious selfless Earth Angel.

"Earth Angel" was actually written for the B~side of "Hey Senorita" but a D~J flipped the record and the song quickly climbed to number one on the charts late in 1954. The Penguins first sang the American Doo~Wop tune under the Dootone label on the seven inch vinyl record. Our young Angel loves the songs of Taylor Swift, the color purple and any animal who takes breath. She is a sweet soul whose smile can light up a room and loves the Lord with all her heart. Even though life has been as rough as a old dried up corncob her attitude makes her my hero...my Earth Angel!!!
Posted by Nezzy (Cow Patty Surprise) at 3:52 PM