The day was prettier than a fat spotted pig standin' smack in the middle of a Missouri cornfield. It was June 18, 1997. 'Twas the day Geek Son had a job interview and my lovely daughter~in ~love , The Latin Lovin' Hillbilly, had a late stage doctor's appointment. This Ozark Farm chick was the designated driver for her appointment in the Big City. "I've been leakin' all mornin, is that a problem," was the question. "Hon, your water is breakin'... ya need to call your doctor right away," was my reply. Plantin' both feet firmly in the ground the well rounded Latin insisted we eat first. Mexican!!! She'd heard those stories how you couldn't eat while in labor so off to a Mexican Restaurant we went. Nope, this one couldn't survive on ice chips alone. Our Hillbilly sweetheart called her doctor's office as soon as the last bite was consumed. Faster than a hound can suck an egg we hoofed it off to the exam room where our soon to be mama was whisked away to the hospital. That was the day I called Geek Son away from his interview. Comin' by it quite natural, the babe ate salsa and chips before he had the teeth to eat 'em. Meet Ethan Issac, the center of attention at his first birthday party.

He was the first grandkiddo to ride a tractor. Yep folks, gotta start 'em young 'round these parts!!!

Ethan or 'Ike' as we sometimes call him, was the first put in the old washtub to eat his chocolate Easter bunny. Ya'll know what a twisted neat freak I am. It worked so dang well, I'd do it again!!! Matter of fact...I did. Heeehehehee!

This clone of his father, is an bright inquisitive child who drank in every experience with enthusiasm and gusto. He's always been a sweet tenderhearted child who has never gotten to old to give his Grandma Muzzie a great big squeeze.

As he got older, he grew a patch of hair on his chest, a mustache under his sniffer and he started talkin' like a briny pirate. 'Just one of the many great birthday parties The Latin Lovin' Hillbilly has thrown her handsome pirate.

Faster than the swish of a cow's tail on a humid Ozark summer day, Ethan appeared to become a rebel. I said appeared ya'll, don't let the vision of this fine young man fool ya. He's a kind thoughtful young man of God.

Sure shootin' this is one fella makes this rockin' grandma more blessed than the first mosquito that entered a nudist camp. My heart is full. Just as James Brown sang back in 1966 in his number one hit on his Billboard Top R&B single, Ethan has a fine strong foundation for walkin' right into " It's a Man's Man's Man's World !!!" 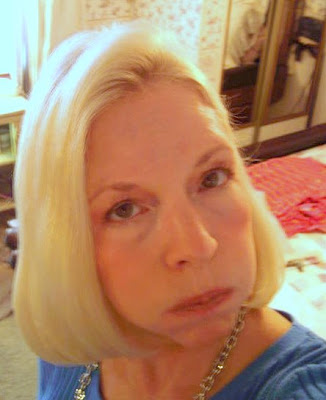 Whew!!! I bet ya'll didn't know this Ozark Farm Chick could hold her breath the whole blessed summer. It's quite a feat for a gal as full of wind as a corn eatin' horse. "Grandma Muzzie has amazin' lung capacity" was announced by my Grandson, Geek Son Jr., after Camp Grandma last year. "Who Can Hold This Note the Longest" was the game and I'd bet the hills and hollers of this Ponderosa ya'll can guess who was the grand champ of that contest. I've always been able to hold my breath or belt out a note like a ovulatin' she~whale on the hunt for her ever lovin'hunka~hunka burnin' love from the ocean's deep.

Summer gobbled up my energy and time like a teenager on steroids devours pepperoni pizza. Hi, my name is Nezzy and I confess I became a little more than overwhelmed. Bein' the all or nothin' Type~A gal I am I just couldn't do both the blog and life justice. I remember sittin' a the breakfast table askin' Hubby just how the heck I kept up last summer as he reminded me I was too sick with those stinkin' shingles to do much of anything else. When the man's right he's right!

Words like floods, plantin', replantin',Forth of July bash, elder-care, tornadoes, Alzheimer Disease, farm hands, heart surgery, wheat harvest, birthdays, Camp Grandma, more heart surgery, glorious flower gardens, baptism, cattle, a major move, sorghum harvest, more birthdays and assisted livin' have flooded my family and my heart this summer. Dang it all to thunder, I haven't even enjoyed my Deep Clean Fridays for a month. I know...what is this world comin' to? I do so apologize to ya'll for just droppin' out. Thanks to all my wonderful blogsisters who have checked in on me over the summer. Ya'll make me happier than a duck on a June~bug. I know I have the best friends in all of Blogland.

Well tie me to an anthill and fill my ears with jelly 'cause if I don't write soon. my already cluttered brain is gonna burst faster then an overfilled water balloon. The posts are pilin' up in the old cerebellum faster than the manure in the low lands 'round here. Besides ya'll and writin' makes my heart sing.

Unlike those good old boys Simon and Garfunkel back in 1966, "The Sound of Silence," is not my cup of tea! Hopefully ya'll can find an upliftin' story and a good laugh when ya drop in instead of "The Sound of Silence"!!!
Posted by Nezzy (Cow Patty Surprise) at 4:00 PM 141 comments: