FAITH CAN MOVE A MOUNTAIN 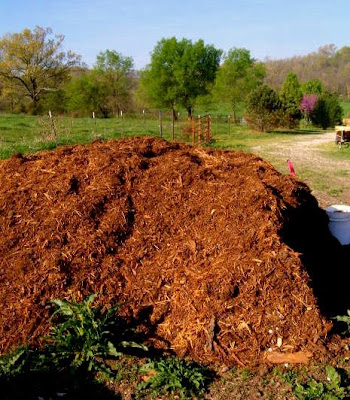 Taller than one of Granny Walden's elevated folk tales or a lofty as a menopausal giraffe's migraine headache we all have a mountain in our life. It can as gigantic as the Earths tallest Mount Everest which towers 29,029 feet in the Asian Himalaya mountain range or as challenging as the northern frigid Alaska's Mount McKinley reachin' a massive 20,230 feet extending her snow-capped head above the arctic clouds.

Calamities of life load us down like a miner's pack mule on a narrow rocky path with life's mountains. Ya'll know the kind that rock your world and turn your insides wrong side out. The ringing phone in the middle of the night informing you of a loved one who just joined the angel band. The face of a surgeon when he tells you that your tiny precious baby girl will probably not make it through the night or the next operation. The tone in your veterinarian's voice tellin' you that some strange weed is killing off your prized hog herd. Financial disasters that have your heart weighted down like a chubby prisoner in a striped jumpsuit chained to a ball and shackle. Yep, these are just a few of the many mountains that have been tossed this chick's way but let me tell ya baby, there's victory in them there hills and the weapon of choice is called FAITH!

The Bible tells us in the Gospel of Mathew 17:20, "If you have the faith as small as a mustard seed, you can say to this mountain, move from here to there, and it will move." Now, those of us that are gettin' a little long in tooth might even need some spectacles or a giant sized magnifyin' glass to even spot a little old mustard seed so we're not talkin' a whole boatload of faith here. Today I challenge you to use that faith to move the many mountains Satan throws in your life path. I've been absent, missin' in action and lax in bloggin' lately. I have been movin' my own little mountain with a potato diggin' fork, a tall white plastic bucket,a big yellow wheelbarrow and a whole lotta faith. The week has been productive. The corn crop is in the ground, fertilized and all. We loaded out three forty foot gooseneck trailers of cow calf pairs and I made a dent in my big old dump truck load of hardwood mulch that forms my mulch mountain.

Guy Woods wrote song lyrics in 1952 that stated," faith can move mountains darling you will see, I can move mountains if you have faith in me." Forget the wrenching convulsion of the charlie horses in this Ozarks farm chicks girlie gams. Never mind the throbbin' spasms that spur the pulsating tenderness in my fifty seven year old lumbar, my acre of flower beds will be dressed and the trees circled with wonderful weed preventin' mulch. I'm keepin' the faith baby singin' right along with Nat King Cole 'cause "FAITH CAN MOVE MOUNTAINS!!!"
Posted by Nezzy (Cow Patty Surprise) at 10:10 AM 118 comments:

"YOU'VE GOT TO CRAWL (BEFORE YOU WALK)" 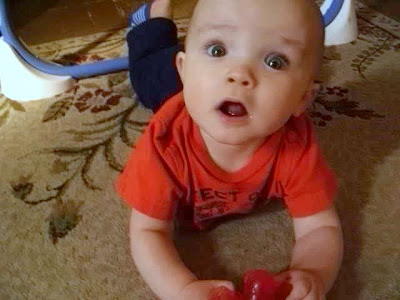 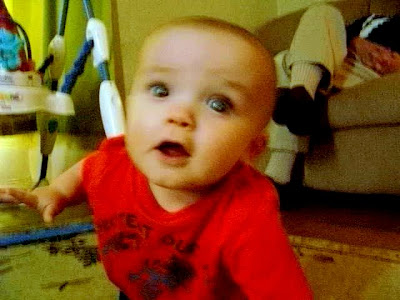 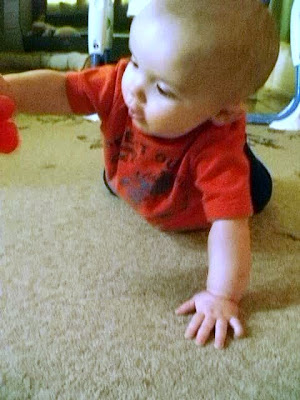 Crawly things can be the "niggets" of unfamiliar spirits that go bump in the blind darkness of night. Other creepy crawly subjects can be made up of things like cantankerous cockroach cooties, slithering slippery slimy snakes, spooky spindly spiders or even the black lace thong on a farm chick's derriere runnin' wild~eyed cattle up and down these hills and hollers but my present favorite crawly thing is my youngest grandson, baby Ian.

During Sunday breakfast a week ago Hubby asked if I'd like to make a trip to Ash Grove after church. Well baby, do frogs eat flies??? Silly boy had to know that question the no-brainer of the century . My answer was," Yep, yes, affirmative, amen most definitely positively I want to go plant my very special noisy grandma kisses on those plump little cheeks. Not lettin' any grass grow under my feet, I started gathering things like a wild woman 'cause it seemed like a coons age since I'd snuggled the little fella up. A lot can change in a month ya know?

After church services and stoppin' in Springfield to split a juicy giant burger at Ruby Tuesday's we headed toward Ash Grove. A girls gotta take nourishment, ya know? Walking into the breezeway there he was in his mama's arms....a smiling bright~eyed bundle of love smackin' the glass in the door with his chubby little digits lettin' grandma know we've been spotted. Ian's two sharp little teeth glimmered through his grins in the sunlight. Oh, it was good to have him back in my arms again with warm cozy snuggles, wide faced smiles and open mouth bird kisses but what was up with Mr. Independent? The kid is on the move showin' off his newest motor skills. Up on all fours the coordination for the full throttle crawl isn't there yet but the little booger can travel doin' the 'worm' faster than a big fat caterpillar bein' chased by a curious hungry cat.

This grandma chick sang, played, kissed, bounced and took pictures gettin' my grandma fix. It was a wonderful day! In 1971 the songwriting team of Holland-Dozier-Holland (HDH) wrote a song sang by 8th Day "You've Got to Crawl (Before You Walk) not long before the group fizzled. This rockin' grandma can be heard belting' out the lyrics loud and clear to baby Ian, "you've got to crawl before you walk back into these arms of mine." Until next time baby.... 'cause "You've Got to Crawl (Before You Walk)!!!
Posted by Nezzy (Cow Patty Surprise) at 1:13 PM 146 comments: