GET ME TO THE CHURCH ON TIME 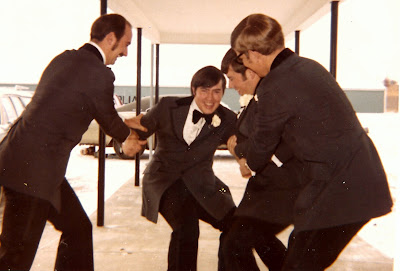 The Ozark skies were grayin' and there was a crisp wet feel in the air that confirmed a dreaded Missouri ice storm was headed our way. It was January fifth nineteen hundred and seventy three. This Ozark Farm Chick could be heard beltin' out the song, "I'm gettin' married in the mornin'! Ding dong! The bells are gonna chime....", from Mama's little country kitchen as I prepared the rehearsal dinner. The circumstances were definitely not desirable for the perfect dream weddin'. Mother Nature had blessed us with a most horrific ice storm as a wedding present, the wrong flowers were delivered to me and mine were a guest at another weddin', the photographer did not show...Heck, he didn't even bother to call. The handsome little ring bearer ran across my train and ripped it from my dress. Just a typical hitchin'...right??

Well this is one gal who wasn't gonna let a few mind blowin' disasters keep her from marrin' the man of her dreams. I AM Nezzy ya know!!! The Best Man drove all night and delivered the groom's parents and grandmother. Even though they were sittin' in different towns the flowers were switched, just in time. Who needs a professional photographer when ya have a future sister~in~law with a trusty brownie flash camera willing to snap away??? Oh my goodness glory, thank heavens for the extra diaper pins we discovered in the church's nursery to pin the train back on my dress. Despite the horrific circumstances we said our, "I~dos'! 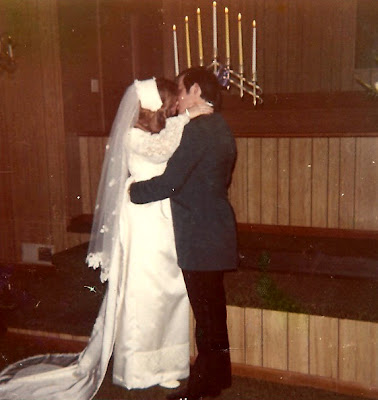 Thirty eight years ago I sang the song that Alfred P. Doolittle sang in the 1956 musical "My Fair Lady" as I cooked and listened to my Grandmother Dow (Ma) gigglin' at me in the background. Thirty eight years ago on January sixth I married the man on my dreams after beltin' out that old show-tune song...."Get Me To The Church On Time!!!"

.........and they moved to the Ponderosa and lived happily ever after! I just love a happy ending.
Posted by Nezzy (Cow Patty Surprise) at 5:15 AM