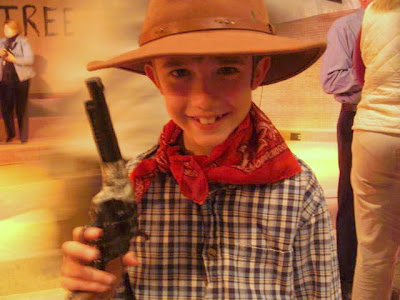 It all begins on December one, when Geek Son and The Latin Lovin' Hillbilly celebrate their weddin' anniversary. My dear Mother~in~Love celebrated her eighty~third birthday on the third of this month. The youngest Brother Outlaw had his birthday on the eighth which was also my In~Laws anniversary. Dear eldest grandson, The Cool Dude, turned sixteen on the tenth. My sweet Daughter-in-Orneriness , yep...that would be the Latin Lovin' Hillbilly, lit her cake ablaze on the fourteenth and Geek son blew out thirty-six candles on the eighteenth but young Tex, man of many faces and cute as a box full of six week old puppies, celebrated eleven years of bringin' sunshine into our lives on the twelfth of this very full and dizzy December. 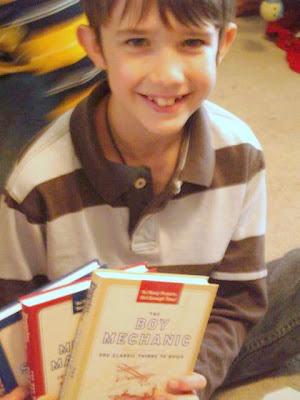 This is Joel who climbs walls with the greatest of ease. Boy mechanic, who can build anything he sets his mind to. No medium is safe within this one's reach. From boards to boxes the adventurous lad always has something goin' on up his sleeve. It is a joy to see him growin' into a fine young man of God. Livin' up to his name Joel, which is Hebrew, "Yo'el"~meaning Yahweh is God and Michael, also Hebrew ,"M'Kah'el"~meaning who is like God, truly loves the Lord with all his heart. Now, this is the kinda stuff that make's this Grandma Muzzie's heart sing. 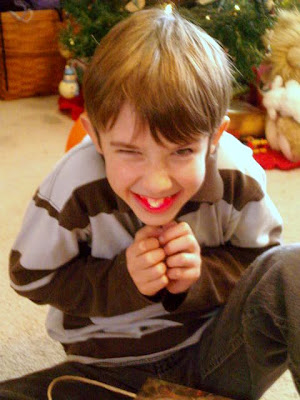 Now, ya'll don't let the face of this astoundin' mad scientist scare the bejeebers outta ya. Yes, he does have a flashin' lit thingamabob in his mouth. Doesn't he look wilder than a mule chewin' a mouthful of bumblebees? Joel's experiments could give Victor Frankenstein, Doctor Phox (Star Trek Enterprise) or even Doctor Bunsen Honeydew (The Muppet Show) a run for their Bunsen burners. Ya'll know every great mad scientist needs a yummy birthday cake with a beaker full of bubblin' magic potion and scientific equations on it, Right??? 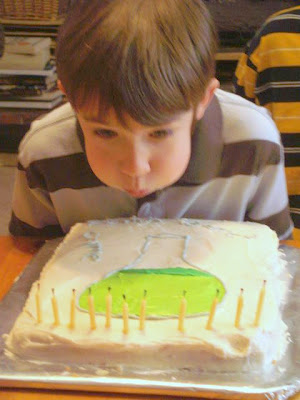 Well, this chick's been runnin' 'round in circles busier than a funeral home fan in the middle of August celebratin' family and then we have Christmas. When daughter, Social Butterfly and her betrothed were tryin' to set a weddin' date she told her darlin' dashin' fiance, " Mama won't allow anyone else to get married or birth a baby in December." They married in January. Ya'll know what happens if Mama ain't happy! Just sayin'.........

In 1969 Tommy Roe sang it best on his 7" vinyl from ABC records with his Pop worldwide single hit which contained a whoppin' eleven key changes, "Dizzy". I've been runnin' 'round in circles as busy as a one legged man in a kickin' contest feelin' like Goofy in the video below...DIZZY!!

God bless each and everyone of ya'll. Have a Merry Christmas and a most prosperous New Year!!!
Posted by Nezzy (Cow Patty Surprise) at 2:10 PM