WE'RE OFF TO SEE THE WIZARD! 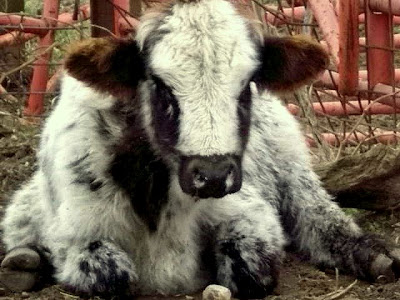 Meet Dead Dorothy. She arrived on the Ponderosa last week malnourished half starved to death. Her mange ridden coat lacks the luster and thickness of a critter prone to holdin' it's head in a feed bag. She is what we call here in the Ozarks a Swamp Rat. No disrespect to all you lovely wonderful southern ladies I love so much. A Swamp Rat is an animal who has been trucked into our area from states like Louisiana and Mississippi to be auctioned at a local sale barns. Dead Dorthy is suffering from starvation, stress and shipping fever. Movin' cattle from warmer states to cooler states works well in the summer but in the winter months...not so much. "Oh baby, I got 'em cheap," are the words I hear flyin' from proud Hubby's lips.

Hubby is accumulating a band of small cattle to feed out for market. He has enlisted the help of a wing man, The Ring~Master who owns a sale barn. A paper thin emaciated cow and her puny skinny calf were ran into the ring to sell and Hubby bought the pair for a mere $265.oo. What a bargain even though I constantly remind this burnin' hunk of love it's only a bargain if they live. The calf was really too old to be on it's bony mama but I'm thinkin' the ring~master threw it in 'cause he didn't want to get stuck draggin' the deceased critter off. Now if ya have ever been to a sale barn ya know it's an exclusive men's club in it's own rite. These guys have their own verbal language only those who belong to the club understand and a sign language they have no problem nodding and answering 'yep' to. In one of these exchanges Hubby understood that this cow~calf pair was part of a divorce that neither party wanted to feed. The cattle trailer arrived at the Ponderosa unloading the cattle purchased that day and the cow was put in the cow pasture and Dead Dorothy was to flourish in the weanin' pen. Yep, the man always has a plan. He's just that kinda' guy.

The first morning that I went up to water the clan at the weanin' pen where poor Dorothy had her heavy head hanging six inches off the ground. Nope, this is never a good sign in cattle. Ya'll want their heads high and ears up. The next morning this farm chick spotted Dorothy layin' flat on her side with her Twiggy legs stickin straight out like road kill. Her sides were not goin' up and down nor was her tail twitchin'. I hollored as I was banging on the metal panels and saw no movement. The other calves walked over and nudged her poor famished body gettin' no response. Now granted I didn't climb over the corral and poke, prod or nudge her but she was lyin' there lifeless as a virgin on a blind date. I'm a farm gal ~I know dead when I see it! First I called time of death then I called Hubby to announce Dorothy had passed.

Saturday morn' Hubby trots into the house singin'," she lives, she was probably sleeping soundly." Now folks, this calf was more than napping, it had to be in some kind of deep comma trance 'cause there was no sign of breath or a blessed miracle dropped from above and revived her. She was call a code and page Dr. McDreamy gone. Dead Dorothy is unable to eat normally so we are 'drenching' her. We take a contraption with a long tube and fill it with milk replacer and squeeze it down her gullet. Much like a NG tube in a human. She has not stood on her own four legs in a few days. Tonight when Hubby gets home he will take the tractor and lift her onto her legs with the front loader. This could be a Kodak moment except it will be dark and I'd only have the light of the moon and the light of a tractor so it could all be a little too scary to show. Thankfully Dead Dorothy's mama is doin' much better than she is.

I almost fainted when I saw the small vaccine bottle of Draxxin costing $355.oo or the Micotil at $150.00. The small $25.00 bag of milk relpacer was nothin' compared to that. There is an abundance of time and a mint put into a sick animal. Most farmers would just give up the ghost and put the poor animal down but Hubby is a wizard when it comes to doctoring cattle. Both Dorthy and Hubby believe that if she clicks her hooves together three times and recites ,"there's no place like the Ponderosa," Dead Dorothy will be granted a full and happy life runnin' up and down these Ozarks hills and hollers singing, "We're Off To See The Wizard!!!"
Posted by Nezzy (Cow Patty Surprise) at 4:20 PM