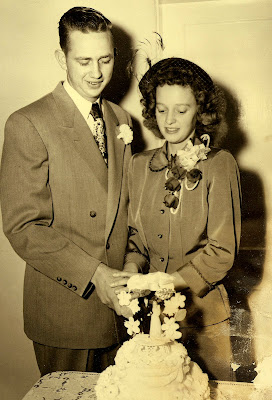 Toilet paper in a four roll pack could be purchased for five pennies. A can of Campbell's tomato soup was a mere dime and a ten pound bag of potatoes brought a whopping thirty~five cents. It was a time when a housewife could fill a grocery bag with three cans of cream corn for thirty eight cents, a loaf of bread for twelve cents and treat the family to a T-bone steak for fifty nine cents a pound. Tunes such a "Hey, Good Lookin," "Unforgettable" and the theme to "I Love Lucy" were blaring from Thunderbird convertibles. George Burns and Gracie Allen were burning up the airways along with "Whats my Line" and the "Jack Benny show." Harry S. Truman was President and the United Nations had just opened in New York City. John Hustons dramatic film "The African Queen" staring Humphrey Bogart and Katharine Hepburn premiered in Hollywood. The year was 1951 and their song was" Mona Lisa".

Country mouse meets city mouse. He was stationed on the Sandia Army Base in Albuquerque, New Mexico as a Military Policeman. She worked at a local movie theater where she had once told John Wayne over the phone, "Ya, right and I'm Marylin Monroe!" She couldn't get the paint out of her hair from painting their new apartment and he couldn't wait to make her his bride. The wedding would be a simple home ceremony with close family and a few friends.

November 14, 1951 at 7:30 in the evening my mother and father exchanged their wedding vows. Mom wasn't going to let a little paint in her hair ruin her day. Dad had less than twenty-four hours before he had to report back to duty. They told everybody they were going to Santa Fe to honeymoon. Oh, that would have been so lovely but time would not allow such a luxurious trip. Ain't nothing worse than a bunch of MP's barging in on a couple 'cause the grooms gone AWOL, so they stopped at a little Podunk town with a Podunk motel and well.... let's just say there was no honeymoon suite available. 'Nuff said. Dad was back on base in time and what did Mom do on her second night of wedded bliss? Can you say slumber party? Her best friend Emma and some other chicks spent the night at her newly painted apartment gabbin' and gassin' as gals do when they get together. Mom and Dad lived in that little apartment until Dad was discharged from the Army about a year later and the Missouri move was on.

Poor Mama moved from the city where water ran freely from faucets and one could use inside facilities. The town was a small rural community with population less than 300. The farm house was a large two story home with electricity but no running water. The bathroom facilities consisted of a two seater outhouse tucked behind two large lilac bushes. Mom was a duck out of water, a chick out of her element. She was moved to a land which spoke a foreign language. Words like county-pin meant bedspread and a safe was a cupboard used to store flour and dishes. When my grandmother announced she needed to go to the closet my mother watched as Grannie walked out of the house and beyond the front porch. Mom's curiosity was quenched when she discovered the word closet meant outhouse. Who knew?

My uncle came to help Dad put screens on the house and Mom was in charge of preparing the meal. Dad asked mom if she would fry a chicken for them. Not knowing what was to come next Mom answered," sure!" Dad went outside ran down a chicken, rang it's neck, beheaded it, plucked it and slapped its naked body on the table saying "there ya go" as he walked off leaving Mom in shocking despair. My uncle noticed the citified look on Mom face stating, "ya don't know how to dress a chicken do ya?" He then proceeded to teach Mom the ways of the Ozarks and cut the critter up for her. Moms first attempt to help with cattle was during a loading event. Dad placed Mom in a space by the loading chute and told her just to stand there and the cattle would go obediently in. Ya right, if you work with cattle ya know they seldom do what their suppose to. Dad headed the cattle toward Mom. Now if your a city gal and you have a herd of cattle runnin' right at you , what's a city girl gonna do? Of course she's gonna let out the loudest bloodcurdling scream from the deepest depths of her lungs and jump right up in the middle of the hood of Hubby's truck. This granted abundant amusement and entertainment to all the in-laws.

Fifty eight years ago my parents married. I was born in 1952 exactly ten months later. In 1960 I was blessed with a sister , a real live doll to play with. Mom eased her way into country life embracing many years on the farm where she could cut up a chicken faster than her butcher in Albuquerque. My parents have since moved to Brownsville, Texas where Dad will never have to feed cattle in the snow and ice again. Soon after Thanksgiving we will be making the trip to see them leaving the Ponderosa behind where I moved after my "Aba-Daba Honeymoon." Happy Anniversary Mom and Dad!!!