DONT FENCE ME IN 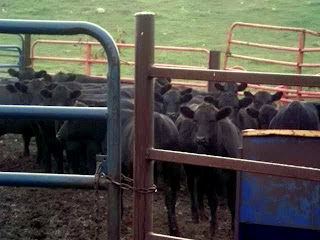 The past three weeks we have experienced wailing that would put any infant nursery to shame. Mothers diligently screaming at their children at the top of their lungs. Ya know, like the ones you see in department stores who just lose it and go berserk . There have been jail breaks like convicts escaping after an unattended Brinks truck. Stampedes like the ones you see in an old John Wayne western flick. Gooshing gooey mud like quicksand sinking this farm chicks barn boots so deep that when Hubby called out, "catch that renegade!" I helplessly replied, "I can't move, I'm stuck !" The Young Guns have been the most difficult bunch of calves to wean on the Ponderosa......ever! I don't know if any of ya'll believe in the sign of the moon thing but when you work with animals or children it can make a believer out of you. Hubby has the habit of checking the sign in the Farmers Almanac after we work, castrate, dehorn or wean the cattle. Three weeks ago after we penned the Young Guns we settled in our comfy chairs for the evening as Hubby pulled out the almanac announcing, "well, we couldn't of picked a worse time to wean 'em." No truer words were ever spoken.

Our nights echoed of loud blaring sounds from mothers with bulging leaky utters calling out to their obvious starving children who would all sing back in vocal unison ," Maaaaaaaaa!" Sweet uninterrupted sleep was not an option not for just a night or two but nights upon nights. During all this we had jail breaks of the occasional starved baby who weighs between 500-700 pounds push through a barbed wire fence and the secondary electric fence just for a nightcap of warm rich milk. Each and every one had to be retrieved during our flood and deep mud. Did I mention the bear? Yep, Smokey took a liking to the liquid feed which has a molasses base that was placed in the weaning pen for extra nutrients. Cattle just love it but to a bear it's like a rich sweet chocolate truffle to a woman with PMS. The act of a bear dining in their territory sparked more than one stampede not only tearing down tight barbed fences but bending steel posts to the ground. Each evening Hubby would arrive from work and I'd don the barn boots and help capture the runaways returning to the house with my fresh washed hair sporting the smell of cow manure. I just want to wash my hair and retain the luscious smell of my Catwalk Fashionista which lingers on my pillow. You know what I'm sayin'?

Last Saturday gave us a much awaited dry day. A day in which we could vaccinate the calves preparing them for pasture. We usually call in the Strongbacks (farm hands) when we full throttle work cattle but we had already castrated the Young Guns so Hubby and I went solo. We have been working together so long we have this vaccinating thing down to a rock and roll science. I had totally forgotten about the large bull calf who had been saved for a nearby farm. The farm that had backed out of the whole deal. The large 700lb bull calf who was now too large to be castrated would need to be banded. We needed a large burly dude with curly chest hair and some tattoos to kink this animals tail up and over its back in the head gate so Hubby could keep all his teeth while banding the calf's treasured family jewels. Nope, there was nobody 'round here to fit that bill so I became the chosen one. The one who slipped thicker leather gloves on her dedicate tiny hands. The one who reached up and over the head gate not really having enough leverage to do the job. The one who said, "I will NOT reach between the bars to grab the animal!" (Reaching to grab said large hysterical ballistic animal between two steel bars=broken arm, duh!) The one who filled the farm air with her high pitched tones announcing to God, Hubby and bordering farms, "I don't have enough testosterone to do this...I NEED MORE TESTOSTERONE!" The one who did it anyway and gott'er done.

Finally the Young Guns have settled. They have been roaming between the corral and holding lot enjoying their feed , sipping on fresh cool well water, snacking on hay and chewin' their cud. After three long weeks of weaning they are ready to be moved to wider greener pastures where they can roam and await the move to the lush winter wheat pasture. I look forward to silent nights, fresh washed hair and smelling like Cinnabar verses the calf pen. Soon and very soon the Young Guns will be moved and will not be singing that old familiar song, "Don't Fence Me In!"