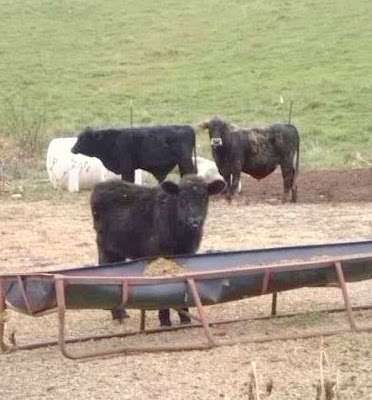 Look up in the wild blue yonder. It's a big old turkey vulture. It's a seven forty seven. Nope, it's Super Nezzy! Faster than a mad speedin' cantankerous bull. More powerful than a cornered ticked off mama cow. Able to leap tall corral panels in a single bound. This mere mortal Ozark Farm Chick commonly known as Nezzy is now a woman of steel eatin' only a small bowl of Quaker Oatmeal and a slice of whole grain cinnamon toast instead of carryin' Krypotonite. 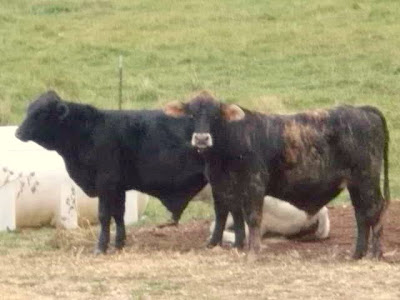 Mornings begin early here on the Ponderosa and this one was no different. We were gonna load out cattle prior to Hubby goin' to work. Breakfast was finished, Hubs four star lunch was packed and his water thermos filled with cool sparkling iced well water. It was six O'clock AM and dark as burnt toast! I notice the love of my life puttin' on his camouflaged manure stompers and asked what the heck he was doin'. "Off to herd those cattle and separate 'em to load the cattle trailers" was his nonchalant answer. I commenced to tell my man that I'd be as much help as Blind Bartimaeus blindfolded in a lunar eclipse bein' night blind and all when he handed me a flashlight. Yep, not the big cattle stick I usually carry, not a hot shot but a flashlight! As I have often stated, my favorite sayin' 'round these hills and hollers is, "ya want me to do WHAT???" I had that feelin' way down in my innards that this was not a good idea and in so many ways just wrong but bein' the good helpmate I am I bolted out the backdoor in my yoga leggins covered with some old CK jeans, a cute little tee topped with a Carhartt hoodie, my Nike' manure runners and ladies and gentlemen....my trusty Maglight! I am after all Super Nezzy! 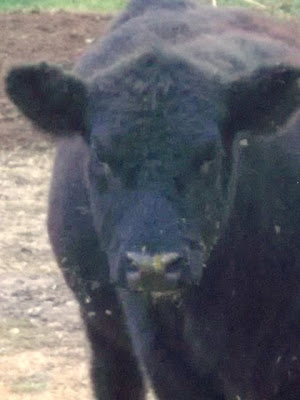 We blindly corralled and penned the critters then began sortin' and cuttin' them out according to sex and size. I was flingin' gates open and stepin' in to turn certain bovines when all the sudden I flung the gate open at Hubby's command and a group charged. I did not have my stick, all I had was my Maglite which did not detour the black furry animal who ran right into me nestling it's head into my chest. Nope it wasn't cooing or sayin', "do ya love me Mama," he just wanted me outta his way....now!!! The Dark Knight pushed his nose just under my ribcage below the Grand Tetons liftin' me up off the ground. Lord have mercy, I thought I'd gone to meet my maker! Still hangin' on to my defense weapon with my left hand, the Maglite, I placed my right hand on the head of another bewildered steer and pushed myself back touchin' my tooties on Mother Earth once again. Gotta love that solid ground!

Baby, I was breathless. Gettin' hit in the chest with a full throttle locomotive will do that to a gal. I leaned up against the corral to locate my lungs , catch my breath and count all my fingers and toes. After we loaded three cattle trailers, I took my achy~breaky body and my useless Maglite back to the house to lick my wounds. As soon I a caught my breath I kinda felt like that rockabilly piano poundin' Louisianian who was the kissin' cousin of Mickey Gilly and Jimmy Swaggart, Jerry Lee Lewis. Singin' his boogie woogie country gospel rhythm and blues songs, Jerry's 1958 single fit my situation perfectly. When I think of the animal I came eye~ball to eye~ball with feelin' the heat of his stinky corn breath and the slime from his slobbers I just wanna sing, "You leave me aaah breathless...ah."