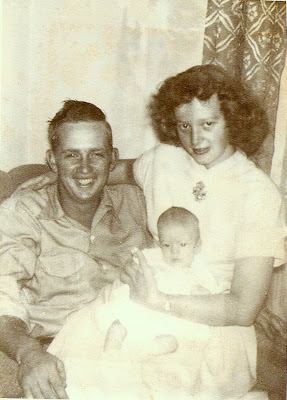 He cradled my entire tiny body in his big strong hand as he reached out to greet me. The first words I heard from him was, " Well ,would ya look there??? She's a real farmer..... why, she's already milkin' and spreadin ' manure!!!" This Ozark Farm Chick was the firstborn and the only boy my Daddy would ever have. Mama loved dressin' her perfect precious baby girl satiny dresses piled with poofy layers of ruffles and lace but Daddy clothed me in cowboy outfits and countrified bibbed overalls. He showered me in cap-guns, cowboy boots, cowboy hats and yes, even my own pony. Later on he taught me how to fish amazin' him by casting both left and right handed. Heck, I could even cast upside down which always put a big old smile on his face. This was a man who wasn't big on affectionate hugs, kisses or sweet sappy words but if he liked ya~ you knew it, he would shower you with gifts and look out baby if he loved ya 'cause restraint was not in his vocabulary. 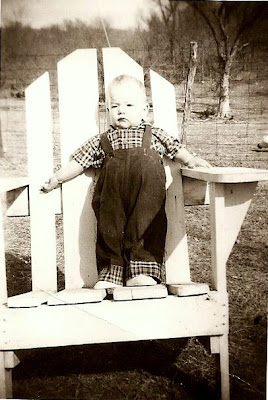 Daddy had a bit of an ornery streak in him that ran through his whole lifetime. As a boy he once told his sister he was gonna buy the little one room High Point School he attended when he grew up and burn it to the ground. Bein' as ornery as a cornered banded bull he in fact, did just that! We had a little old spinster neighbor lady who called late one cold December evening in a panic fearin' that Dad's hayfield was ablaze. As it turned out, it was just the aura of the red Christmas lights that adorned the old well house the prankster decorated in the middle of the big pasture. My best friend and I were chewin' buttons the cold snowy mornin' the jokester decided to try out his new four wheel drive pick up as he drove straight over the steep hill our house rested on instead of takin' the gravel road 'round the hill. Squeals streaked from my children as he chased them around his house snappin' his false teeth in his hands sayin, "I'm gonna bite you!!!" He once took my son to Charlie's Country Store in Filly to get any bottle of soda pop he wanted. Seein' three year old Geek Son 'round the corner with a liter of orange pop as big as he was totally cracked Dad up and of course bought the colossal thing. He initiated my DIL into the family with a WalMart bag filled with the most realistic rubber black snake ya'll have ever seen grinnin' that grin and sayin', " Here, I bought something for ya!" 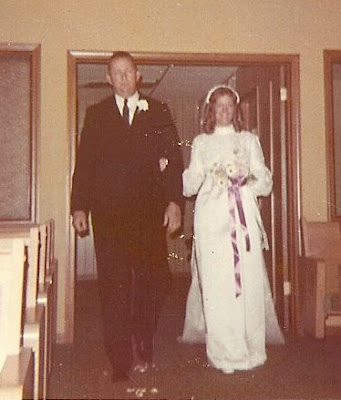 He's the one who taught me how to saddle and ride a horse and make snow igloos. The one who showed me why you don't shoot a shot gun strait up in the air. Yep folks, he got a big belly laughin' hoot outta that one! He taught me how to drive a car and the control the big tractor after I ran it into the only truck in the wheat field. I received loads of Dad advice like, always carry enough money to get home when ya go out on a date and never look at anything after you've already purchased it. Helpful things like it doesn't cost any more to run a car full than it does empty. How to stand in front of runnin' cattle turnin' them into the workin' pen and even how to jump those corral panels if necessary. He taught me about castration, vaccination and dehorning the wild eyed bovine critters. Even as he walked me down the isle on my weddin' day to marry the man of my dreams ( or as Dad called him, "that long haired hippie guy") he was sayin', "it's not too late my little chicklett....you can still back out. That long haired hippie became the father of his grandchildren, son and treasured confident. 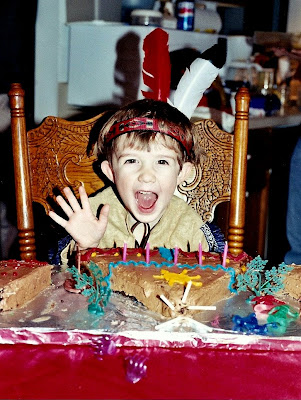 Mom and Dad moved from their Missouri farm in Stockton to Brownsville, Texas where Dad no longer had to feed cattle in the ice and snow. This is where Dad began his long battle with leukemia and many other forms of cancers. Shocking his doctors by surviving impossible odds time and time again, Hubby and I often called him Timex..."takes a lick and keeps on tickin'! He lost this battle the middle of October. He will live on through his children, grandchildren and great-grandchildren. This little great-grandson dude is Dad incarnate. When Joel was born Hubby called him 'Little Bill' and when he gets that ornery gleam in his eye and grins that familiar grin I can see my Daddy. Dad was a lover of the Grand Ole Opry that I often heard echo from his bedroom on the Saturday nights of my youth. Kinda like Red Sovine who hung out with the likes of Minnie Pearl, Charlie Pride and Hank Williams. Daddy fed on Sovine's truck drivin' hit's like Teddy Bear, Cryin in the Chapel and Lay Down Sally but I long to belt out Red's 1974 hit song 'Daddy's Girl' loud and strong.


You will be missed but this Ozark Farm Chick will forever be 'Daddy's Girl'!!!
Posted by Nezzy (Cow Patty Surprise) at 2:28 PM