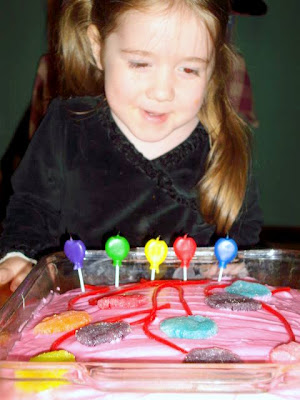 By porin' some sugar in a sauce pan then stirin' in a good portion' of corn syrup, water then enhancing the concoction with a flavoring that will delight your taste buds and bring your brew to a rollin' boil ya'll can have a lip lickin' sweet treat in about twenty minutes. The edible candy on a stick dates back to 1784 where it initially was referred to as soft instead of hard candy. The word 'Lolly Pop' is broken down into 'Lolly' meaning tongue and 'Pop' meaning slap. Today's modern reference dates back to the 1920's where lollipops were rumored to be invented by George Smith who started brewin' these hard candies in his Connecticut home namin' them after his race horse "Lolly Pop". How fast can you get to the center of a Tootsie Roll??? If you would like to try your hand at makin' these candied sticky lickers just click on this 'tacky' recipe. Heeehehehe! 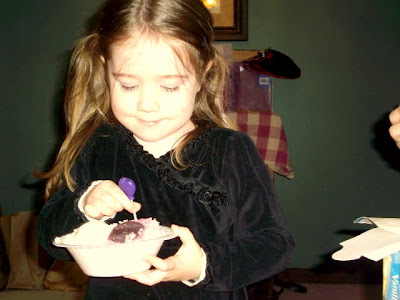 This confectionery sweet darlin' delight just celebrated her fifth birthday on October, 14th. A luscious dessert to our family she is always spreading sweet fondant blessings through her good natured kindness and consideration. Named Sarah Grace,the youngest of four, has lived up to her Hebrew name meanin' princess. Grace originates from the English language simply meaning full of grace. If that one just doesn't crank the rusty tractor so we just call our sweet little bon-bon Gracie. 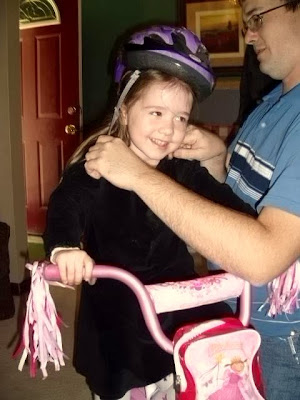 This Ozark farm chick knew she was gettin' both granddaughters real ballet slippers and leg warmers for their birthdays but durnin' an intense conversation Miss Sarah Grace told this rockin' grandma she wanted a pretty pink Hot Wheels Car...with glitter. My response to Gracie and her siblings was, "Do they make pink Hot Wheels Cars...with glitter???" With 'nos' flyin' from all directions and heads shakin' back and forth like they were watchin' a ping pong tournament, I knew this was not goin' to be as easy as slidin' off a greasy log backward. Well, not wantin' to get caught with my pants down I flew into action buyin' a Lamborghini gold Hot Wheels car, pink paint and clear silver glitter nail polish. That teeny~tiny car got two coats of pink paint for four days in a row then two glitter coats for two days. Yep, I was havin' more fun than a tornado in a trailer park and was as pleased as punch on how the pink sparkly little Lamborghini turned out. The astound look on Sarah's face and the dazzle in her eyes as she pulled the little car out of the bottom of her ballet bag made the effort so worthwhile. Why, Geek Son even said he wanted one so I asked him what color??? He answered, "Pink of course...with glitter!" 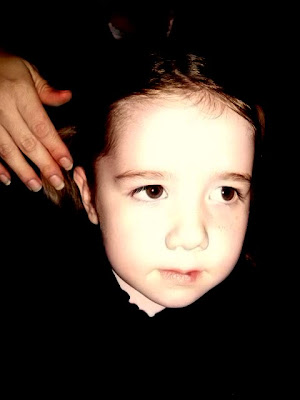 Her smile is as warm as the bright sun on a summer day and sweetness is her orb. Just take a look at that face and tell me ya don't want to eat this child up. In 1958 Beverly Ross and Julius Dixon wrote " Sweeter than candy on a stick, huckleberry, chimry or lime" for their single 7" RCA record "Lollipop" sang by a female quartet. In viewin' the video I noticed a familiar face doin' the cheek-poppin' sound for the song. Yep, I was correct..it was a very young Andy Williams. After a little research I found the video was filmed during the Chordette's appearance on the Andy Williams Show. In my mind this song was written for Sarah Grace ' cause each and every time I lay my big browns on her I just want to belt out, " Lollipop lollipop , Oh lolli lolli lolli "Lollipop"................
Posted by Nezzy (Cow Patty Surprise) at 12:35 PM