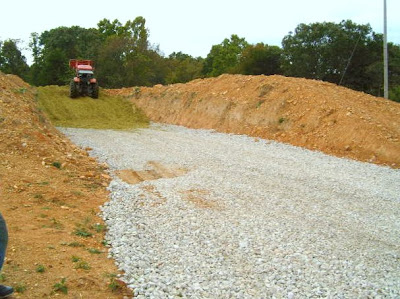 Barren as a freshly spaded female dog, this ginormous hole in the ground sat empty and lifeless a good part of the summer. We had just enjoyed a wonderful Ozark shower before the bulldozer was summoned thinkin' it would make for an easy dig. Mr. Burly Tobacco Spittin' Dozer Man uncovered earth that was drier that lizzard spit on a hot rock only an inch below the surface. The in-ground silo was dug just awaitin' some form of life. 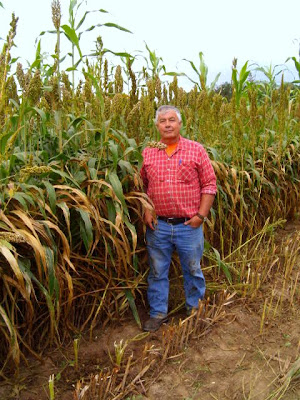 Meanwhile, down in the bottom land there was activity takin' place. Hubs had planted a couple of the fields in dwarf sorghum this year. Yep folks, ya heard me right, this stuff was "dwarf". Can ya imagine if we planted the "giant" stuff? In spite of spring floods, tornadoes and summer drought this species of heavy headed grass yielded a whoppin' 311 tons. Woohoo baby, the cows are gonna eat high on the hog this winter just like my hunka'~ hunka' burnin' love who's outstandin' in his field! I love this man!!! 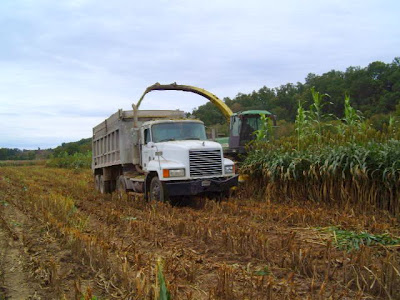 The chopper ate it's way through the fields like a hungry 'coon knawin' on a juicy ear of corn fillin' up one truck's appetite after another. We chopped our sorghum into silage (livestock feed) but with over thirty varieties it abounds in uses. It can be used to make syrup, molasses, fodder, alcoholic beverages, feed grain and seed. The trucks ran hard fillin' up our big barren hole in the ground where it suddenly took on a hue as green a gourd guts. 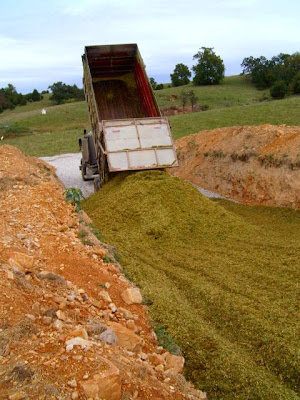 Tractors packed the green morsels down as tight as a camel's derriere in a sand storm while the trucks continued pilin' more in. The heat of the product began to radiate the sweetest smell arisin' from the once comatose cavern. New life grew as nature's enzymes worked hard to produce a priceless commodity. The choppin' crew said, "we ain't never seen a crop like this before!" Our phones began ringin' almost immediately with farmers wanting to book and purchase the quality livestock feed. Ya'll gotta remember...it's Tiny Town...word travels faster than an hyperactive auctioneer high on coffee can holler, "sold!" 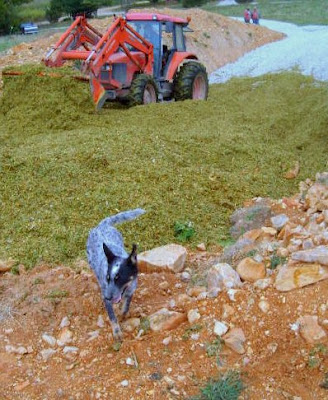 I got to thinkin' that big old hole in the ground is kinda like a life without God, empty, barren and unproductive. Then ya plant the love of the Lord in our hearts and it simply makes us priceless children of God. Now, ya'll gotta love that transformation more than fresh molasses drippin' off a homemade biscuit. My Mini~Me asked Jesus into her heart a little over a year ago and kept it to herself for awhile 'cause she didn't want to hurt her daddy's feelings. She thought he might feel bad 'cause she now had a Second Daddy~God the Father. Doesn't that just melt your pea~pickin' hearts? 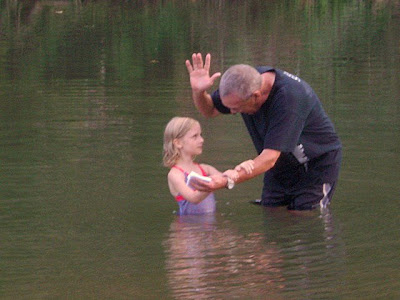 This summer Miss Honor decided to take a stand and be baptized, her public obedient declaration that she has decided to follow Jesus. Our little princess is not barren. The Temptations said it well when they sang,"like the rose bud blooming in the warmth of the summer sun," in the song written by Smokey Robinson back in 1965. I'm just pleased as punch to say that little Honor's faith, walk and relationship with God..." It's Growing!!!"
Posted by Nezzy (Cow Patty Surprise) at 2:45 PM