ANGELS WATCHING OVER ME 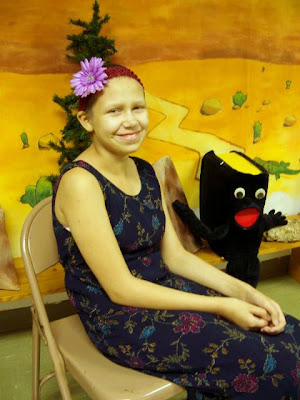 Charmin' as a long shot candidate on Election Eve, Angel has had a horrifically difficult year . August 2010 this beautiful gal had a tumor removed from the base of her brain-steam and was diagnosed with Medullobastoma .She was lifted with God's love and masses of prayers as she seized the moon with her teeth and beat the cancer odds. I have to tell ya'll my heart was heavy the day she told me she was tired of the fight. Her bony body was unsteadily frail and she was so stinkin' skinny she'd need to run around in the shower to get wet. Doctors found puttin' weight on our Earth Angel was kinda like tryin' to put a dress on a worm. I'm pleased to say that Angel had her last souped up mega blast of chemo in September. Three weeks later it hit her like a ton of bricks when she lost her hair...again! She tells me it's difficult to remember a time before she had cancer. It's been all consuming for her.

Angel Dawn is now a full fledged seventh grader attendin' Tiny Town Middle School. Her favorite part of school is lunch (the girl does love to eat) and gettin' to participate in PE with her friends. The spunky little doll says havin' cancer has made her trust others, especially her family. Like any teen she loves the music of Taylor Swift, Avril Lavigne and Zach Brown. Although she still adores purple, she's quite smitten with blues and greens too. Angel is ecstatic that she's able to go outside and do 'normal' things like pick up walnuts and play with her animals. I saw the old twinkle return in her eye when she boasted "I jumped this week!" I have observed that she has become more self~confident and outgoin' through her illness. 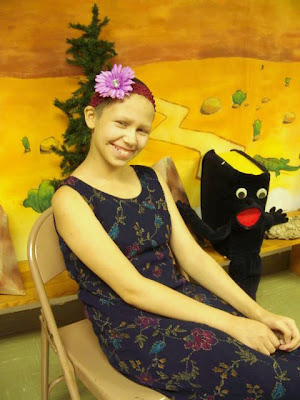 Today she is stronger and has plumped up a bit. Isn't she prettier than the precious perfectly spotless lamb of Passover??? Ya gotta love that smile! She occasionally misses her friends at the hospital but doesn't miss the needles one bit. Angel returns to the hospital monthly to have her port flushed and every three months for a cancer recheck.

The girl's as happy as a hog in slop when she's in the presence of animals. She wants to be a Veterinarian or Board Animals when she grows up. Her current menagerie consists of six goats, five cats, twenty chickens, four callin' geese (forgive me, I have not self~control), five ducks, twenty~eight rabbits and the gerbils are multiplyin' to rapidly to count. Eat that Dr. Doolittle!!!

Amy Grant sings "God only knows the times my life was threatened just today." This Ozark Farm Chick must confess that watchin' Angel fight her battle tried my faith to the max this summer. The 1984 song that won the Grammy Award for Best Gospel Vocal Performance states, "If your asking me what's protecting me, then you're gonna hear me say: ' Got His angels watching over me, every move I make." Angel Dawn can belt out first hand that He's got His
"Angels Watching Over Me!!!"

*Angel is a neighbor of the Ponderosa. She is also one of my Sunday School students and a member of my Kid's Church. Would ya'll join with me in prayer that she remains cancer free?
Posted by Nezzy (Cow Patty Surprise) at 4:00 AM