A WONDERFUL GUY (I'm as Corny as Kansas in August)

Sportin' more tassels than a stage full of Vegas striptease artist, she stands strong and tall. Her silky strands blow softly in the wind as her body rustles to and fro in the valley's breeze. The aroma of her sweet perfume arises to greet the afternoon sun. Corn, a member of the grass family, is one of the many crops that are planted here on the Ponderosa. I'm not sure what we were thinkin' this year when we named her our 'Cash Crop'. Now, if that thought wasn't like a lost ball in high weeds!!!

Everybody knows the quickest way to double your money is to fold it over and put it back in your pocket but that' just not the farm way. We take every blessed cent and put it into our land, herds or machinery. Makin' a livin' on a farm is much like gambelin', we're only a hail storm, flood or drought away from poverty. That's why many farmers have jobs off the farm simply to put food on the table for his family. Lord knows, this is one chick who's learned to squeeze a quarter so tight the eagle screams. It's easy to invest a years salary puttin' a crop in the ground. Due to 'fixed' market reports the price of corn fell harder than a drunk on a corn mash wagon at harvest time. I'd be streachin' it to tell you that it's even gonna cover our expenses but we're still as happy as if we'd had good sense. It's just the way we fly! 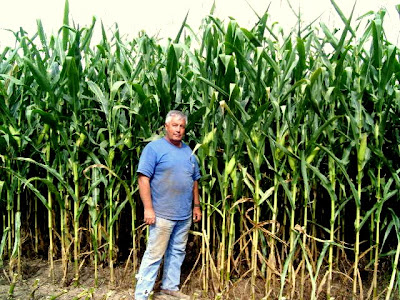 Poor 'Farm Boy', I seem to only take pictures of him when he's dirty. What can I say? The man gets dirty when he's workin' and he's always workin'. No matter what, dusty 'Pigpen' makes my heart swoon today even more than it did almost forty years ago.

Did ya'll know that an average ear of corn has 800 kernels in sixteen rows? Who figures this stuff out? If ya bagged up a pound of corn, that bag would contain 1,300 kernels. Each year a single US Farmer provides food and fiber for 129 folks- 97 Americans and 32 on foreign soil. Fifty five per~cent of our corn in the US is shipped to overseas markets. Corn is produced by every continent in the world except Antarctica. Truly, I'm not just hangin' noodles on your ears here.

When it's so hot the hens in the hen-house are layin' hard boiled eggs and it's drier than happy hour at the Betty Ford Clinic the leaves and stalks of the corn begin to dry into a crispy brown fiber. As the yellow kernels start to dimple prettier than the face of Shirley Temple, we know it's time to pull in the combine for harvest time on the Ponderosa. 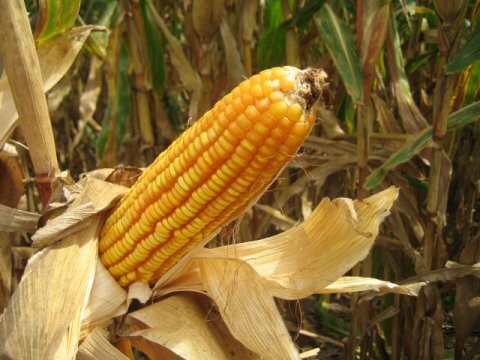 This show tune was written especially for Mary Martin's spunky bubbly personality for the original 1949 Rodgers and Hammerstein Broadway musical, South Pacific. It was later sung by Mitzi Gaynor in the 1958 film adaption. I too can sing "I'm as corny as Kansas in August" or be so stinkin' poor that we have to go down to the local KFC and lick other people's fingers, I can rest in the fact that I'm in love with "A WONDERFUL GUY!!!"

CORNY JOKE: What did the corn say when she got complimented?
ANSWER: "Awwwww......shucks!"
Posted by Nezzy (Cow Patty Surprise) at 2:49 PM