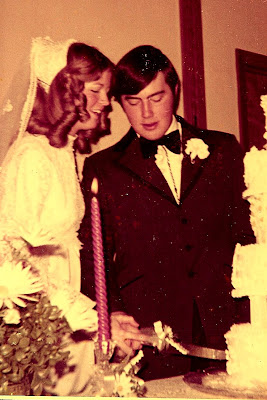 It was a time of raging turmoil and yet a time of unclouded innocence. Young men were being summoned from their familiar surroundings to fight a bloody conflict (war) in Vietnam. The bells rang out as the Dow closed above a thousand for the very first time. Even though cars were lining up at the pumps and the oil crises had made OAPEC a household word, we could still fill up the 1965 Pontiac GTO for .385 cents a gallon. Tony Orlando and Dawn were tying a Yellow Ribbon 'round the Old Oak Tree while Elvis performed his final farewell concert in Hawaii. Sherman Hemsley made his first appearance on All In the Family just a movin' on up and Police Story made its television debut. The Miami Dolphins had finished a perfect 17-0 winning the Superbowl. A kitchen could be well stocked for under ten dollars a week purchasing apples for 59 cents a pound, Ajax cleaner for 15 cents, four rolls of toilet tissue for 13 cents and ground round for 79 cents a pound. This sheltered Ozarks farm chick had packed her bags two years before leaving Tinytown behind to go to college and find herself. One warm October evening I went on my first and last blind date. It felt like I had been hit in the gut by the helmet of NFL's star quarterback runnin' full force with the ball as I walked down the stairs of the Phi Mu Sorority house. Hold me back mama~~somebody grab the paddles and shock me 'cause this boy took my breath away!

He could be heard by his Frat brothers broadcasting, "I'm in love" walking into the Alpha Gamma Sigma house after our first date. My sorority sisters surrounded me with enthusiastic remarks like, "boy he really likes you," and " he didn't let go of you one time at the dance." Yes, I guess it was thoroughly evident that I was as twitterpated as a Disney character in his presence. His basilisk gaze made me week in the knees, put my head in a whirl and sent this chick walkin' on air. Evident to everyone except 'The Parents.' My mothers first response was, "I sent you to college to meet a doctor or a lawyer and what do ya bring home....another farmer." Daddy remarked, "well in my mind, anyone with hair that long has to squat to pee!" Yes, his hair touched his earlobes! Oh, how they wanted his number to come up in the draft. My future mother-in-law was NOT gonna sign for her twenty year old son to marry, besides she always wanted her boys to marry hometown girls. The saving grace was that my future father-in-law saw how very smitten we were and besides after raising three boys I think he kinda liked the idea of having a daughter. He loved to tease and I could take it, stir it up and serve it right back at him on a warm silver platter, with that I stole his heart.

On the sixth day of January, nineteen hundred and seventy three the day I dreamed of all my life had arrived. Every bride dreams of the perfect wedding day. I was no different besides I had just been a bridesmaid in such a wedding the week before when the temperature was a balmy seventy degrees. During the rehearsal dinner a horrific Ozark's ice storm set in covering the earth with a solid sheet of glossy ice slicker than snot on a glass door knob. My husbands brother, the best man, drove all night at a snails pace from Searcy, Arkansas picking up his parents and grandmother along the way forging ahead to the wedding. It was not the day I had visualized but it was my day and I was about to marry the man of my dreams so I was determined to make the best of it. Things went array, the florist from a nearby town delivered the wrong flowers intended for another wedding at a different location. In a calm manner,(cryin', screaming and stomping of feet),this was corrected in the nick of time. The little ring barer stepped on my train rippin' it off at the waist. Thank God for safety pins. The photographer booked did not bother to travel the sixty miles of icy roads, or pick up a phone. We just requested the guest to take loads of pictures with their Kodak Brownies. The Stockton Christian Church was filled with the correct flowers, wonderful friends and loving family to share our day. This moon~eyed chick had just said," I do", to the love of her life so it was a perfect day. It was my perfect day!

After a beautiful reception we headed to Branson to begin our life together. In 1973 Branson consisted of the Presely's and Baldknobbers variety shows and Silver Dollar City, all closed for the winter months. Lovestruck people just don't think well. The couple hotels there stayed open where a blizzard snowed us in the Holiday Inn for three days. From there we went to Little Rock and swung by Searcy to visit the brother-in-law and his wife where their Shitshu peed on our bed. Yep, their Honey~ mooned our bed! Slippin' and slidin' all the way, we made it back to the Ponderosa where we still forever sing about our thirty seven years together and how it's "Just an Old Fashion Love Song!"
Posted by Nezzy (Cow Patty Surprise) at 9:21 AM