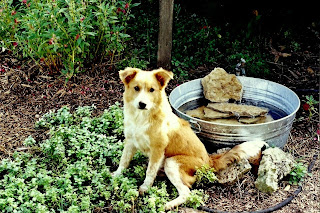 A brave guard dog who always displays protective courage. One who charges at danger with the speed of lighting and roar of thunder. A fighting canine who will chase away those who rob and plunder. A dog who makes any frail farm chick feel warm and all fuzzily safe just known' her trusty companion is near. These traits may describe Underdog but Tiger the Wonder Dog....... they are NOT!

Several years ago shortly after our beloved Scampy passed of old age a tiny stray showed up timidly cowering under the cottage gardens' walkway. I wanted to find another home for this scraggly hungry pup and pick out a 'real' dog but Hubby had other ideas. I can still hear his words, "ya need a dog for protection when I am out on the truck." Yes, I had to agree. I spent much time alone with me, myself and I. We enjoyed each others company while Hubby was away. I did need a good aggressive watch dog. Hubby went on to state what a good cow dog this puppy would make. I was used to Scampy who would stand between me and the stranger who stopped by. Scampy who always barked when someone drove in or walked toward my door. Scampy who we could judge our daughters young courtiers by. She had bit through cowboy boots and even chewed at the tires of their pick-up trucks if she didn't trust the young gents with our sweet girl. Oh, that dog was a marvelous judge of character! Scampy often singed her mouth and fur saving us from our blazing fireworks by grabbing the lit explosive and running through the field with it to prevent her family from harm. Finally, I surrendered naming the little stray Tiger in hopes he would live up to his boldly ferocious name.

Tiger grew up morphing into a fine looking dog. He looks very strong and mighty. He looks like he would be the territorial protector of his home and family. Well folks, let me tell ya...looks could not be more deceiving. It's quite embarrassing to admit how very wimpy this dog is. Tiger is not a cow dog, so not a worker of the cattle. In fact he chases them along with cars. He rarely barks when we have someone come but we can always count on him barking as they leave. If a stray dog visits you can find Tiger shaking like a paint mixer under the car watching the visitor devour his kibbles. Wildlife in our yard is not chased away by our brave pup as he chooses to let them dine also. We have everything from armadillos to cougars and bears 'round these parts. In the mix of all these critters trembles Tiger the Wonder Dog.

I must brag a little. May I? I'm throwing out my chest poppin' my buttons here. Enjoy this, bragging rarely happens when it comes to my beloved pet. There was one time last summer when I was going to burn trash Tiger showed his one and only burst of boldness. As I opened the gate to walk to the trash barrel, Tiger bolted by me with mighty speed almost knocking this chick off her feet. He boldly streaked past me around the barrel gabbing a raccoon who was obviously ill by the neck carrying it away from me. Tiger made sure the 'coon was demised before he returned for praise and a pat on the head. The sick raccoon probably was rabid. Uncharacteristically he saved me that warm summer day. One bout of bravery our Tiger the Wonder Dog has on his resume but no one will ever mistake him for the fearless "Underdog!"