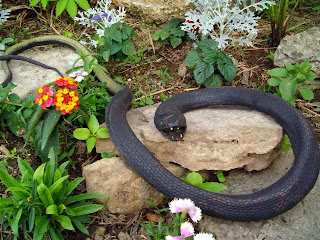 Meet Lucifer. He is the rubber snake my very ornery father introduced into our family many moons ago. He waltzed into our family room with a Wal-Mart bag and handed it to my soon to be daughter-in-law. Dads way of welcoming this sweet girl into the family. Since then Lucifer has been the subject of many pranks startling friends, family and salespeople alike. I have used him as a visual in Kid's Church and a decoration in several themes. His most important job is warding the barn swallows away from our carport. Messy little birds they are!

A couple weeks ago Lucifer was curled up on the car where the swallows were staking their claim from above. It was Thursday and I ALWAYS mow on Thursdays. I also always move the car to the lot behind the house where it is safe from flying objects that could be hurled from the mower.(rarely happens...but...just in case) I flung Lucifer over the edge of the carport roof, mounted the lawnmower to begin my two hour task. Don't get me wrong, I love to mow. One might say I am obsessed with it. Hey, I like my grass even. Nothing wrong with that, right?

I was sporting along full throttle down be-boppin' to the tune in my head. I had no thoughts of Lucifer or where I had flung him. Hypnotized in the mow zone, I zipped around the corner of the carport carefully mowing a strip along the path when it happened. Out of nowhere a big black snake dropped from above. I'm telling you, this chick almost lost her bladder! Body shaking, heart pounding louder than a drum and shrieking like a tree frog, I managed to stay on the moving mower......just barely.

Today I put Lucifer back in the bag and placed him on the shelf in the closet where he resides when he is not working. Next time I get him out will I use him for good or evil? Will I be a Devil or Angel? ' Just depends!!!

Posted by Nezzy (Cow Patty Surprise) at 7:38 AM