Other than bein' stickier than a three year old's cotton candy fingers at a three ring circus, the day began just like any ordinary summer Sunday. This chick get's up to put on her Bare Minerals face while Farm Boy fixes his weekly Big Top Breakfast. Hub's goes to check cattle while I clean the kitchen, make the bed and do my hair before walkin' out the door for church. Hubs teaches the Adult Sunday School Class while I teach a Pre~Teen Class then Kid's Church.

We often laughingly chant, "day of rest, day of rest, day of rest" while dartin' out to the car. Seems like our Sundays are busier than a one armed cab driver eatin' a meatball sub. The weatherman on the radio confirmed our day was gonna be hotter than an honeymoon hotel makin' the humidity stickier than a prickly cockebur. Just another day in the Ozarks. So we thought! 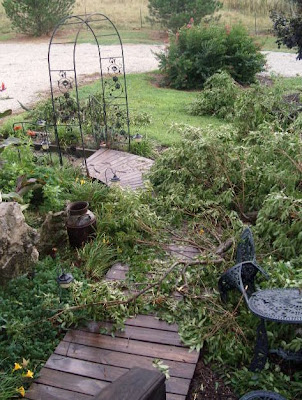 That Sunday evenin' we drove into Tiny Town to attend evenin' services we call 'Share and Prayer'. The meetin' was amazin' but we couldn't see the greenish~yellow tinted sky through the blue stained glass windows. 'Wasn't 'till Pastor George said, "it's lookin' really strange out here," we recognized that all too familiar eerie hew and decided to beat the storm home instead of stayin' in the safe confinement of the churches basement. We hoofed it to our car while the sky colored like a sea sick yellow Lab closed in on us. 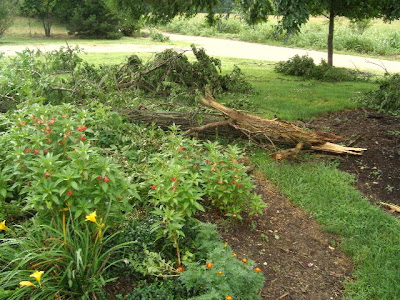 We no sooner left the churches parkin' lot 'till the wind started blown like perfume through a High School Prom. Farm Boy turned into a skilled demolition driver as the hail and large debris began poundin' the car. Determined Hubby swerved this way and that down Main Street dodging large tree limbs and lawn furniture landin' in our path. 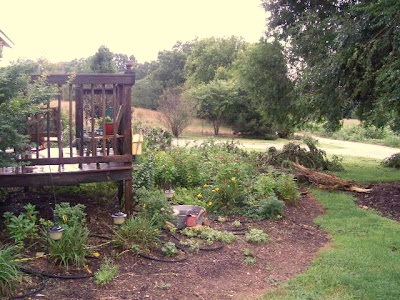 We turned down Wall Street and if anything, the violence worsened. Suddenly, I morphed into Jamie Gertz who played Dr. Mellisa Reeves in that 1996 Twister movie 'cause I vaguely remember turnin' to Hubs and sayin', "I gotta go Julia, we got cows!!!" This Ozark Farm Chick went through a tornado when I was five and they are my biggest fear. I gotta tell ya, between the hail, the limbs and the stuff in the road all I wanted was my Mama! 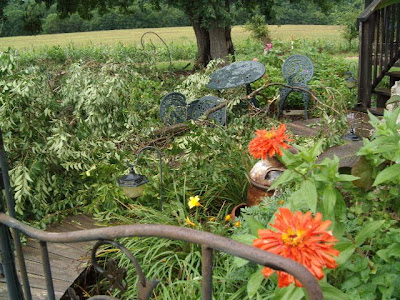 I realized the unrelentless storm was followin' us like a starvin' dog chases a meat wagon when we hit the highway headed toward the Ponderosa. We met a car flashin' lights warnin' us of limbs on the highway. Then a pick~up flashed us. Oh this can't be good...a tree!!! My panic didn't lessen as we swerved this way and that avoiding downed trees and giant limbs. The storm hung over our head like a three day hangover on a drunk no matter how fast we traveled.

I was scared baby, and desperate measures were in order. I've been known to remind God Himself that He can calm the storms. Shakin' harder than the Parmesan Cheese shaker at Pizza Hut, I prayed and prayed hard as we came to the end of the blacktop and entered our dirt road. Oh, Lord...please let us have a house! 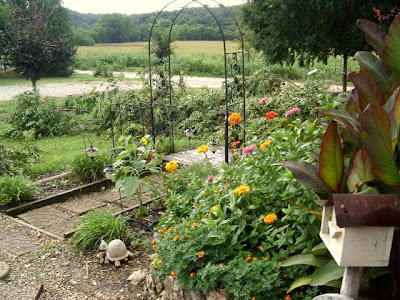 Oh my goodness glory, what a mess things were. My cottage garden, birdhouses or bistro set will never be the same. Ya'll can only imagine what this did to my OCFD (obsessive compulsive flower disorder). I'd removed some of the large limbs before I snapped the pictures but we had a house. Praise God! One limb came right down the corner of the house with enough force to plant it deeply in the ground. God had answered my prayers...again!!!

Our lives may become tangled more than a ball of knittin' wool attacked by a litter of frisky kittens or twisted like a crown of thorns yet the Maker can pull us apart and put us all back together stronger than ever. He does it with ease and compassion no matter how violent the storms may come. All we have to do is ask, call his name or just simply whisper the name of Jesus. Yep folks, He loves us that much. How awesome is that??? 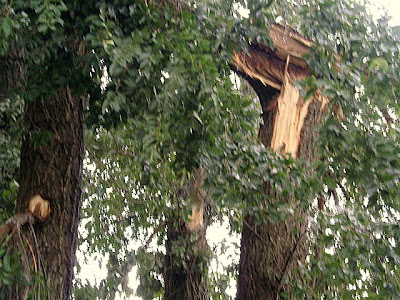 Born in Spring Gulley, South Carolina, Ernest Evans was raised in the projects of South Philadelphia, Pennsylvania with his parents and two brothers. Facin' the twist and snares of life he formed a street~corner harmony group at the ripe old age of eight. Life was not easy for this fella but God took his tangled life and molded him into a great performer of his time. It was his boss, Henry Colt, owner of Fresh Farm Poultry who tagged Evans with the nickname, 'Chubby'.

A great twist of fate is that Dick Clark invited 'Chubby' to do a private recording for American Bandstand. After completin' an excellent impersonation of Fats Domino, Clark's wife asked the young singer's name. Evans replied, "well my friends call me 'Chubby'. Clark's wife then substituted 'Checkers' for Domino. Hence the name...'Chubby Checkers'.

This hit song was released in 1960 from Checkers very unlikely twisted fate. Whether life becomes as twisted as big old elm tree's roots or it's the physical storms that scare the bajabbers outta ya, I'm so thankful we can call on the One who stills the waters when we tangle ourselves into "The Twist!!!"