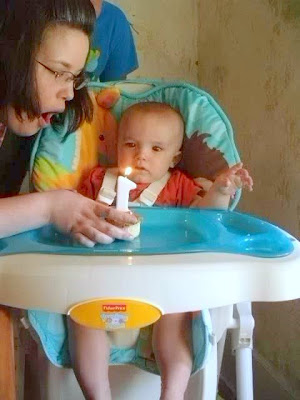 'God is forgiving' is the Hebrew definition of the name Ian. 'A happy blessing' is the interpretation Bible scholars give the Hebrew name Ashyr. All this Ozark farm chick knows is that I was happier than a gopher on diggin' day when he was born into our family. He makes my heart sing!!! Baby Ian blessed us with his arrival 7/8/2009 and has been a babblin' bright eyed bundle of joy ever since. The little guy celebrated the big number one last month with a grand party filled with cake presents and loads of love. 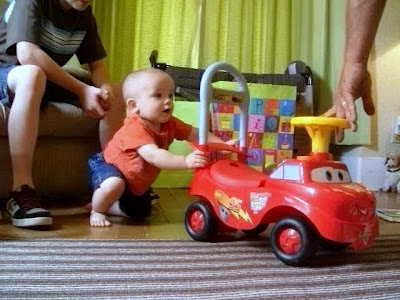 Of course this rockin' Grandma and Gramps had to get something every one year old needs...his first car! Yep, complete with a key which turns the motor (err-err), a cell phone that rings, a shifter that makes shiftin' sounds, a radio that plays his favorite tunes, a gas hole that glug-glugs and a horn that goes beep, beep, beep! Mr. "Lighting McQueen can be used as a push toy or driven as a car. Now, doesn't that just curl your toes? 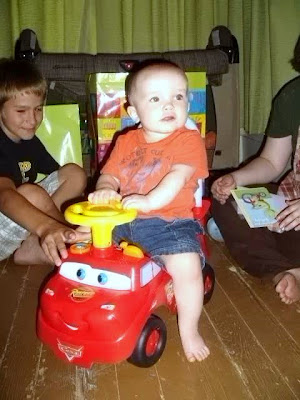 This sweet talkin' boy took to this mix between a Corvette and Dodge Viper that has the characteristics of Steve McQueen and the voice of Owen Wilson like a duck to water on a hot summer day. Ian's sweet babblin' jibbers are becoming sweet, sweet words. When eatin', and let me tell ya'll...the kid loves to eat, he'll say "more peese and kank kou." It's just never too early to be polite. The little fella knows who butters his bread and bakes his biscuits. Why, just the other day he told his sweet mama while she was puttin' on her face, "mama pitty!" Learn young, don't they??? Heeehehehehe........ 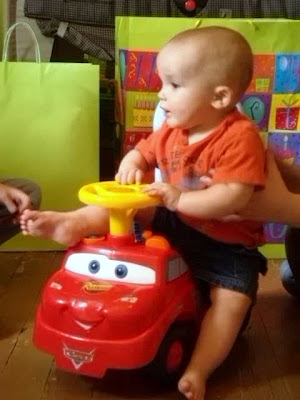 Yep, he's a toddlin' charmer who can down a bowl of strawberry short-cake faster than a bee stung stallion can move to the other side of the horse pen. God blessed us richly when he added this one to his creations and our hearts. He'll be wavin' bye-bye as that old 1958 novelty tune of the Playmates is playin ' on his car radio and you can hear him leaving 'cause his horn goes beep-"BEEP! BEEP!